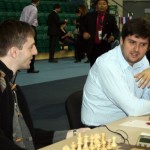 Grischuk’s second at Linares, Khismatullin, made this cryptic comment at the end of his description of Grischuk’s loss to Topalov.