Chronicle of a suicide

That’s the title Yury Vasiliev gave to an amazing interview with Topalov after the final game of the World Championship match in Sofia. Topalov reveals what went through his mind when he committed consecutive blunders on moves 31 and 32, while Anand also gives his views on the match.

Vasiliev’s final report on Linares 2010 was a bumper round-up of interviews with the participants, including Topalov’s pyramid theory of why he should only play for large amounts of money. 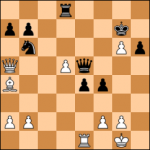 Fresh from winning the Tal Memorial in Moscow, Kramnik gave a couple of interviews where he talked about the upcoming World Blitz Championship, later won by Carlsen.