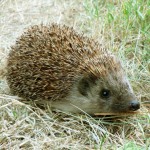 My favourite moment of the 2009 World Cup had to be Sergey Shipov revealing on his forum that he had received a remarkable e-mail from Czech GM Victor Laznicka’s mother.