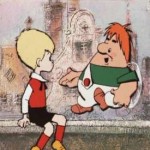 While translating Sergey Shipov’s commentary on the recent tournament in Bilbao I came up against a minor problem – how best to convey Magnus Carlsen’s Russian nickname, “Malysh”? I went with “the Kid”, but my uncertainty was picked up by a Russian reader who wrote in to explain the surprising story behind it.